Town Common, Greenville’s most visible civic space, sits on 20 acres of open space. Located at 105 East 1st Street, this centrally located resource is unique in that it is located between the Uptown Central Business District and the Tar River. As Greenville continues the trend of revitalizing its urban core, the Town Common has become an integral part of uptown development.

To capitalize on the momentum of Uptown development, the City of Greenville completed and adopted the Town Common Master Plan in 2010, a plan that offered a holistic overview of revitalizing the park.  View the plan here. The plan achieved the following goals established by the City:

In 2016, the City Council contracted with Rhodeside and Harwell, Inc. for the development of a Schematic Design and Master Plan Update for the Town Common. This included an all-inclusive engagement process that afforded residents and stakeholders the opportunity to provide input on the proposed amenities and design. A copy of the Town Common Schematic Design and Master Plan can be viewed here.  An Open House was held on January 12, 2016 and two days of public input meetings with five focus group sessions were held on August 29-30, 2016 to get feedback on the master plan.

An image of the schematic design approved by the City Council is included below. 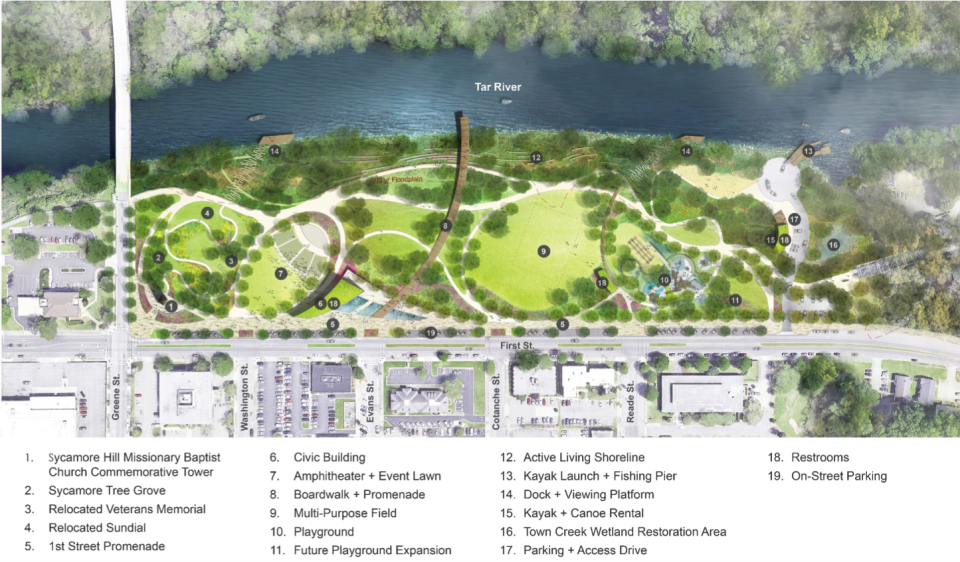 Amenities that were a part of the Schematic Design and have been completed since 2016 include the following:

The Town Common Master Plan also proposes a civic building that is described as an 11,000 square foot event space, cafe´, restrooms, office space, storage space, and expansive views out into the park. Additionally, the Master Plan identified a location for a kayak/canoe rental facility on the east end of the Town Common (see below).

In 2018, the City learned that the proposed location for the event space would not be allowed due to Land and Water Conservation Fund restrictions. As a result, the City identified the commercial location of the WOOW, Inc. radio tower as a location that did not have the restrictions of the Land and Water Conservation Fund. The site is approximately 1.4 acres and is located at the northeast end of the park, adjacent to the Tar River and the parking lot. This is the only parcel of property to be developed as included in the Master Plan unanimously approved by the City Council. 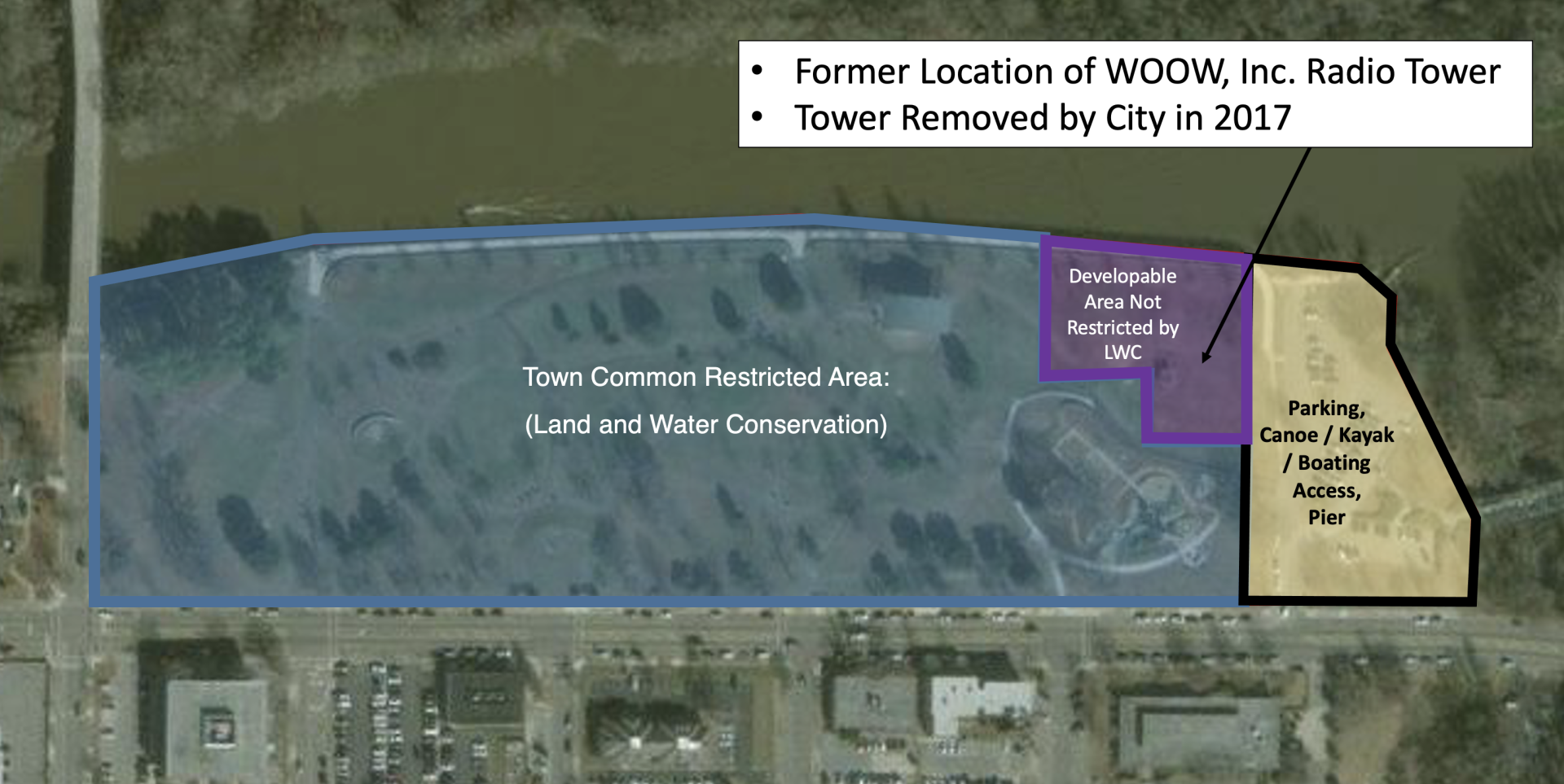 In 2018, the City began working with the East Group to develop a project plan and a schematic design for a prospective restaurant/event space project. 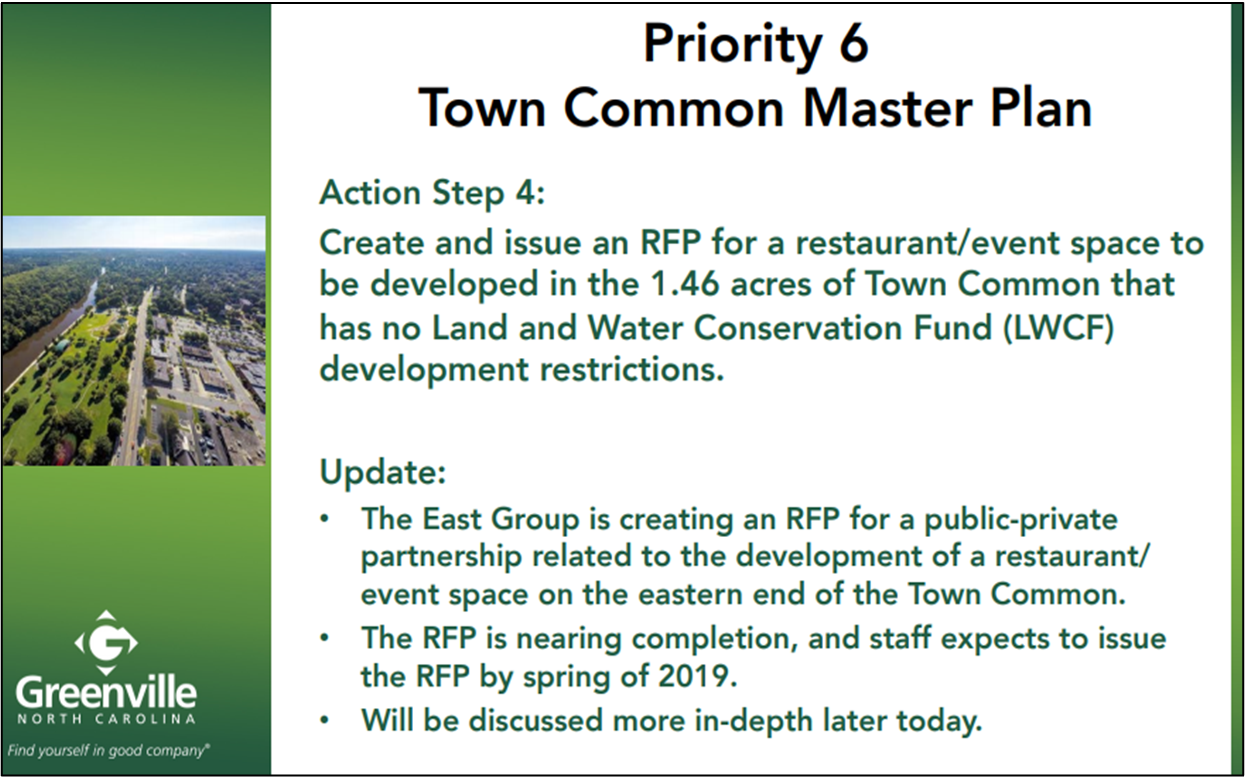 Images of the conceptual development plan created by the East Group are included below. 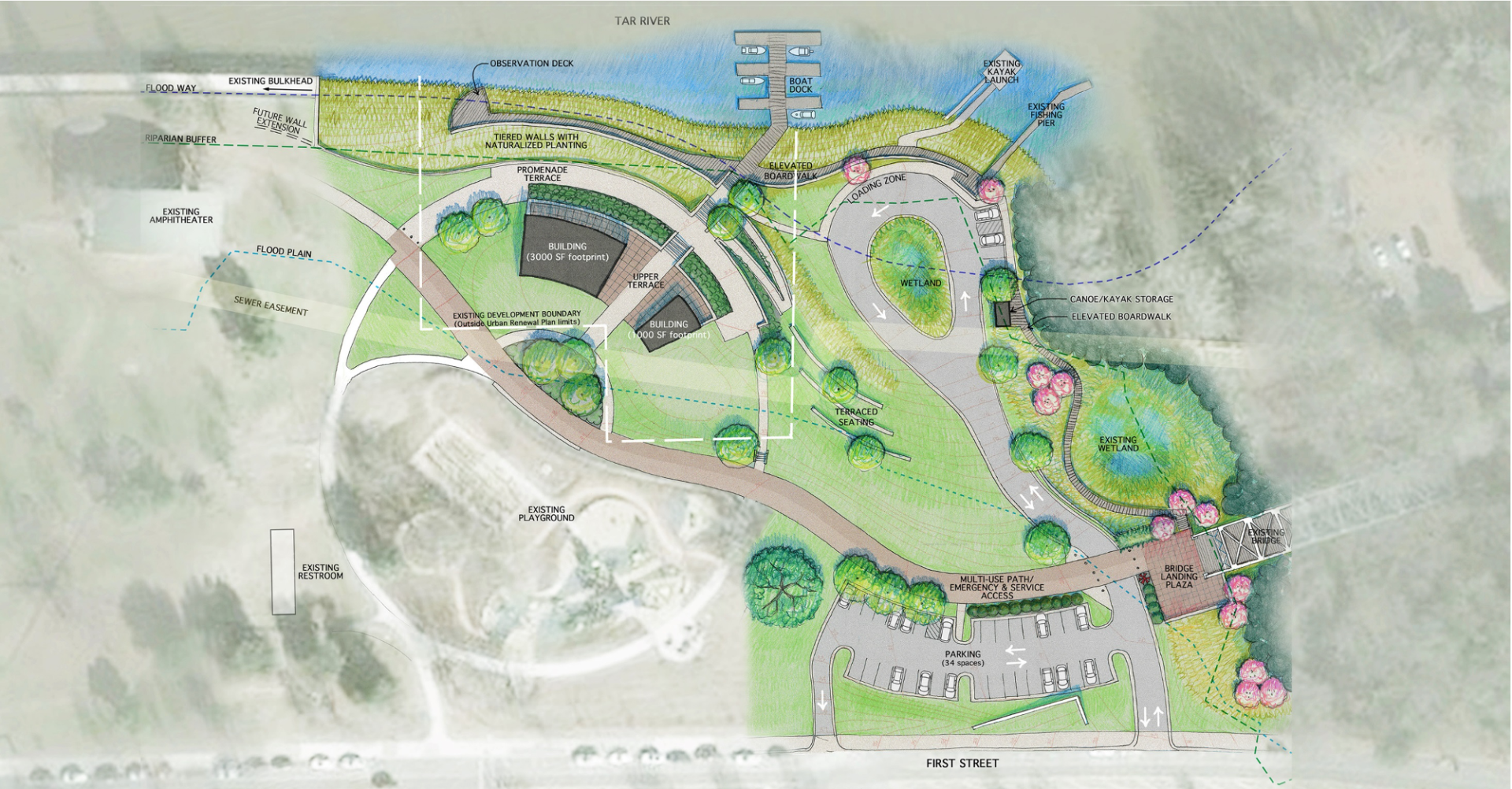 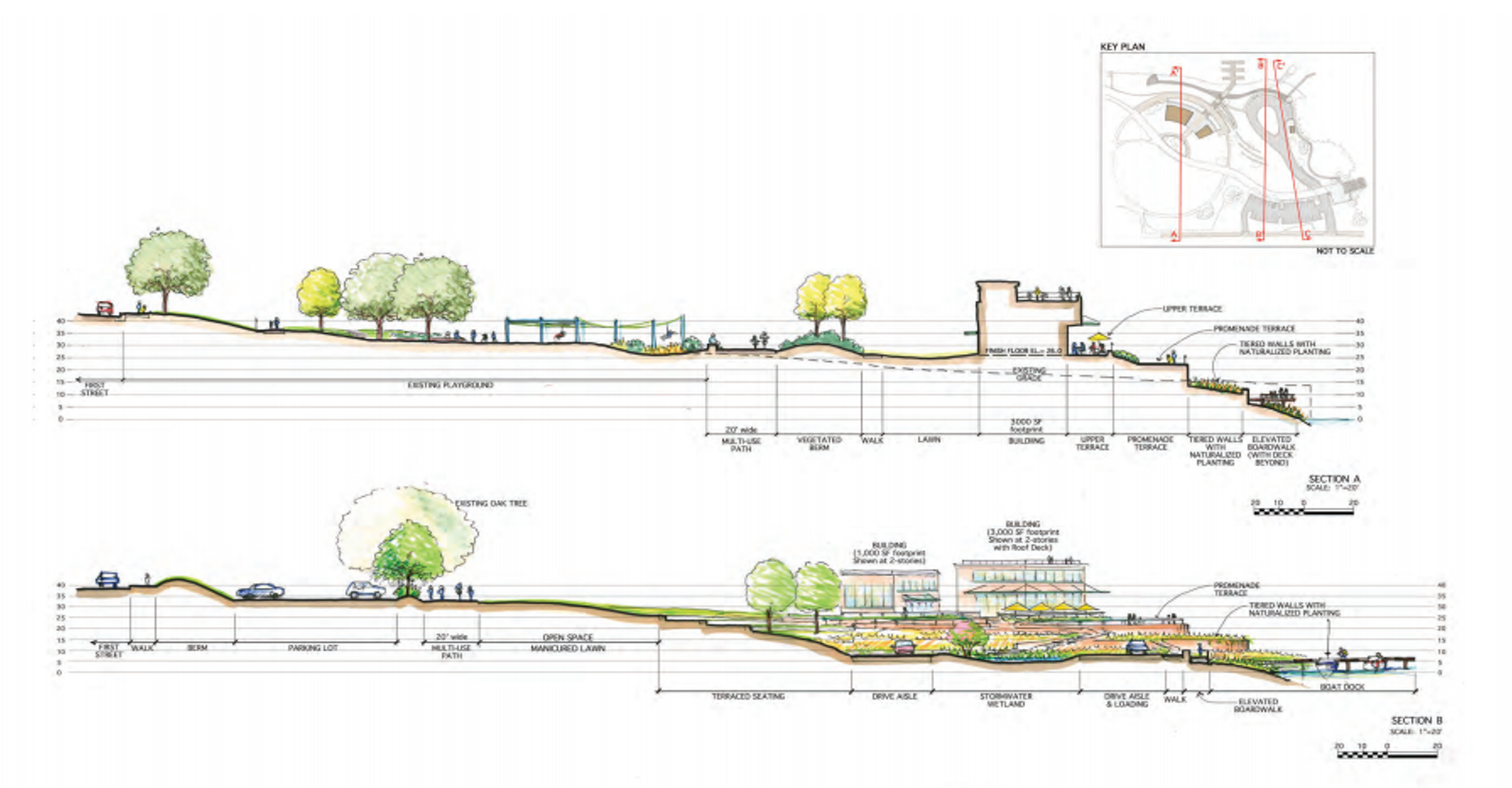 During calendar years 2019-2020, the east end of the Town Common was used as a lay-down area for the Town Creek Culvert drainage improvement project. In March of 2020, the COVID-19 pandemic caused further delays in any advancement of an event space/restaurant project.

With the Town Creek Culvert project complete and the community bouncing back from the COVID-19 pandemic, the City has started moving forward with planning for the event space/restaurant project.

In order to be in a position to allow for a future project, the City Manager's Office has requested to rezone the eastern portion of the Town Common from Office Residential (High Density) and Residential  (High Density Multi-Family) to Downtown Commercial. This designation would allow for an event space/restaurant to be located on the 1.4 acre parcel of the Town Common.

A virtual public hearing on the proposed rezoning will be held during the City Council meeting on Thursday, June 17, at 6:00 p.m. Those interested in participating can call the City Clerk's Office at (252) 329-4422 for more information or email comments to publicinput@greenvillenc.gov and include "Town Common Rezoning" in the subject line. View a copy of the presentation for the public hearing here.

Any project that is brought forward to the City Council for consideration will be centered around terms acceptable and agreeable to the Council. Any project located on the property would have to complement the Town Common, fit in with the Town Common, and serve all patrons of the Town Common. Additionally, a project would only move forward under a long-term lease between a developer and the City. Any proposed project would also be taken to out to the public for public input, and the feedback would be shared with the City Council.