Post Date:10/12/2017 5:21 PM
GREENVILLE, N.C. - The Greenville City Council moved the much anticipated Town Creek Culvert project forward during its meeting on Thursday night, unanimously approving a contract for the $33 million project that will upgrade the downtown area's drainage system.
Council approved funding of $22.28 million for the Town Creek Culvert and a 10 percent contingency budget of $2.22 million. Work on the culvert will be completed by Trader Construction Company of New Bern, N.C.


The project, which includes many green infrastructure components, will be funded in part by the Stormwater Utility Fund by stormwater utility fee revenues through a combination of financing sources including a $16 million zero interest loan funded through the Clean Water State Revolving Fund as well as $3 million funded by Greenville Utilities Commission for work associated with their water and wastewater infrastructure. The Clean Water State Revolving Fund loan for this project is the largest loan in the history of the state.


"This is an amazing opportunity for the City to incorporate water quality improvements in an urban environment where we need them the most," City of Greenville Senior Engineer Lisa Kirby said. "In this case, not only are we being good stewards of the environment but we are saving the citizens a considerable amount of money through the zero percent interest green infrastructure loan."


The Town Creek Culvert addresses drainage issues for about 300 acres in downtown and adjacent areas, beginning near Ninth Street and Washington Street and continuing to the Tar River. The City began the study and design phase of the Town Creek Culvert project in the fall of 2013.
"When we talk about this project, it is not just a storm water pipe," Public Works Director Kevin Mulligan said. "It is a storm pipe that goes through the middle of town. All of the roads will be replaced. The sewer, water, gas, electric, and cable will also be relocated and replaced. It is truly a vital component for uptown investment."
The current culvert was built in the early 1900s and needs to be substantially rehabilitated or replaced due to multiple failures and localized flooding. City officials say the urgency of the project is driven by the 10th Street Connector project which is currently under construction. The Town Creek Culvert is one of the main outfalls for the uptown area and the 10th Street Connector.
Completion of the Town Creek Culvert is expected to take 30 months with work beginning in early 2018.
The project will pave the way for the re-opening of Third Street, which has been closed since December 31, 2015, due to the failure of a section of the Town Creek Culvert drainage system. Additionally, the following streets will also be directly impacted by the project: Fourth Street, Fifth Street, Reade Circle, Cotanche Street, Evans Street, Eighth Street, Washington Street, and Ficklen Street.

The City of Greenville will continue to work with businesses in the uptown area and the public to minimize the impact of the project. Regular updates will be provided. Anyone seeking more information about the project should contact City Senior Engineer Lisa Kirby at (252) 329-4683. 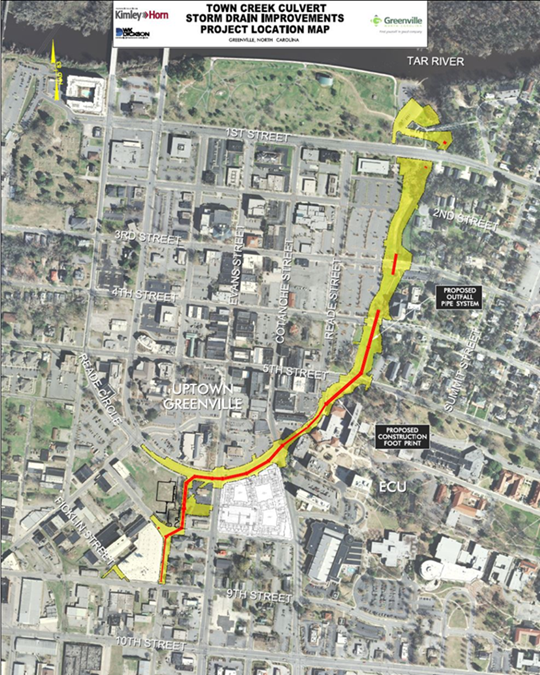